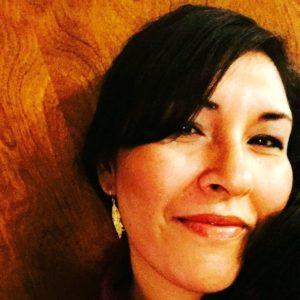 I strive to create and maintain a safe and nurturing learning environment to honor all ages, identities, cultures, and abilities in the development of the whole artist through respect, mindfulness, and humanity. With an investment in the arts throughout our communities, we can curate conversations to impact the blueprint of our humanity which fuels me as teacher and learner.

Emerson College
2010 – 2020
For the last decade, SiouxSanna has served as an affiliated faculty member and guest instructor in the department of performing arts at Emerson College, Boston. She has taught the following college courses in the areas of Theatre Studies and Design and Technology: Languages of the Stage, World Drama in its Context II, Stagecraft: Crafts, and Stagecraft: Masks.

Suffolk University
Fall 2007
In the fall of 2007, SiouxSanna co-directed the play, Elegies for Angels, Punks and Raging Queens. The production served as a platform for AIDS Awareness and education with students, Suffolk University. and the Boston Community.

Emerson College
2006 – 2014
For eight years, SiouxSanna served as an administrative assistant to the chair of the department of performing arts.

Boston Arts Academy
2010 – 2020
For the last decade, SiouxSanna Ramirez-Cruz has served as a consultant and substitute theatre arts instructor. As consultant, SiouxSanna serves as an admissions adjudicator to the theatre department. During the 2010-2011 school year, SiouxSanna created an acting, movement, and voice curriculum for high school theatre juniors in the studies of Shakespeare, Molière, and contemporary playwrights through the foundations of Viewpoints and Linklater training.

Our Lady of Lourdes School
1993 – 2005
As a music educator, SiouxSanna introduced the foundations of music theory, voice, and movement through multicultural music for students in Pre-K to Grade 8. The curriculum was performed in the annual Multicultural Night, where the students' performances celebrated a palette of countries and their native languages for the community.

Currently, SiouxSanna serves as director of education for Broadway Experience. She works closely with organizations throughout Boston and surrounding states to share the experience of live Broadway productions to our next generation. SiouxSanna creates a curriculum identifying the themes within each production, their design and technological elements, as well as the foundations of theatre history. Broadway Experience workshops have included: West Side Story, Wicked, Aladdin, and Dear Evan Hansen.

For ten years, SiouxSanna developed and directed the Children’s Company, a musical theatre and creative dramatics program for youth ages 5–16 and a visual arts program for children ages 7–10. Performance highlights include: Where the Wild Things Are, Cinderella, Peter Pan, The Lion King, Seussical, Pinocchio, James and the Giant Peach, and Annie; and the Children’s Art Studio in mixed media for vacation and summer camp programming.

As community outreach coordinator, SiouxSanna was responsible for the development of the community arts outreach season for Suskind Young At Arts, the educational department of the Wang Center for the Performing Arts. In designing each season, SiouxSanna worked with various company managers and production teams including: Disney, Radio City, and the National Broadway touring companies of: Miss Saigon, The Phantom of the Opera, Riverdance, Burn the Floor, and Bring in 'da Noise, Bring in 'da Funk exposing all ages to the arts through interactive workshops preceding the performances. Working with local guest artist educators, SiouxSanna devised educational workshops and study guides to explore the themes in each production. SiouxSanna also served as director of the teen drama club and co-wrote two musical plays: Making Connections and Yesterday, Today and Tomorrow, performed at the Majestic Theatre. She also served as the stage manager in collaboration with the Boston Public Schools’ MLK Celebration at the: Blackman Auditorium, and the Wang and Shubert Theatres.

As director of education for the Publick Theatre, SiouxSanna was instrumental in the creation and development of the Young Company, the immersive classical outdoor Shakespearean training program for teens. Through  instruction, apprenticeship. and understudy students were taught and mentored by a professional company of actors and technicians.

As co-executive director of the School of the Arts & Performance Center, SiouxSanna created community partnerships with local schools and taught creative dramatics, drama, and musical theatre; directed and performed in the Riverside Repertory Company and served as director/creator of A Tribute to Bob Fosse, A Tribute to Andrew Lloyd-Webber, and A Tribute to Judy Garland.

As a theatre instructor for AileyCamp, SiouxSanna created and led an introductory course in acting through improvisation, movement, and voice.

As a music educator, SiouxSanna taught a child and parent music curriculum for Tiny Tot Tunes serving the communities of Boston, Canton, and Dedham.

As a music educator, SiouxSanna taught a child and parent music curriculum for Family Music Makers serving the communities of Newton, Boston Back Bay, and Brookline,

St. Mary of the Hills

As a theatre educator, SiouxSanna taught, directed, choreographed, and designed the annual musicals: Schoolhouse Rock, Once On This Island, Joseph and the Amazing Technicolor Dreamcoat, and Godspell for ensembles of over 40 participants.

SiouxSanna served as the curriculum creator and theatre instructor of Youth In Action, the teen performance touring company to promote non-violence. She led playwriting, acting, and stage combat workshops, and directed I Dream, the original teen production.

“Ms. Ramirez-Cruz is what I consider a quiet storm.  She has this amazing way of reaching out to the emotional state of where a student is and drawing them into where they need to be without raising her voice.  This sense of calm permeated through all the classroom experiences enabling them to not only feel respected but to hold on to the knowledge, which they had the level of expertise to bring.  They were looked upon and treated as professionals and in turn acted as so.”

“SiouxSanna made me feel so safe, empowered, and valued, she really helped me to unleash my creativity and try new things and work hard for the sole purpose of being proud of my work.”

“The professor Ramirez-Cruz was excellent and supportive.”

“SiouxSanna was so clear about her expectations and she was so supportive throughout… she made this class everything that it was. She is extremely knowledgeable about all the concepts.”

“With SiouxSanna’s guidance and encouragement Michael’s passion for costume design was channeled. SiouxSanna did more than provide a framework of experience for Michael, she enabled and nurtured his passion by providing a creative outlet.  She challenged and encouraged him to not just learn from his triumphs but his mistakes as well. Each aspect of the production experience was a teaching moment. These experiences have led Michael to Boston University’s Design and Production Major at the College of Fine Arts where he is pursuing a degree in Costume Design. I firmly believe that Michael would not have found this path without the encouragement and oversight of SiouxSanna. She has been a true mentor, teacher and collaborator.”